And Scarlett Johansson’s trainers consulted on the gym.

Written by Marisa M. Kashino from Washingtonian | Published on June 25, 2019

Pretty much every developer building luxury apartments in DC will tell you they’re designing them for Millennials. Typically, that translates to a rooftop with Instagrammable lounge areas, snug (but light-filled!) units, and hiring a concierge who keeps dog treats at the desk. For his company’s first new building in Washington, Aria Development cofounder Joshua Benaim took it a step further, consulting a focus group of 20-somethings at Harvard Business School, his own alma mater, for their input on the design.

On a recent afternoon, Benaim gave me a tour of the final product, the Clifton, a 156-unit building just north of U Street at 13th and—you guessed it—Clifton streets, NW. He says it should be ready for people to move in by July.

First stop: the mail area near the reception desk. “They were like, ‘Just get me my packages,’” he says of the Harvard cohort’s advice. He shows off the options for various types of deliveries he installed as a result. They include: refrigerated storage for groceries, Amazon Hub lockers, and—on another level, near the gym—Dryy lockers, where residents can drop off and pick up their laundry and dry-cleaning.

The apartments themselves range from one- to four-bedrooms. The bedrooms in the larger units are of equal size, making them easier to divvy up among roommates, another tip from the focus group. In a one-bedroom model unit, Benaim explains how the Harvard students told him they’d rather pay less for smaller apartments, as long as they’re efficiently planned. In this one, the kitchen is basically in the living room. But he says the appliances “recede” into the cabinetry so they don’t impose. He describes the layout as “Zen.” 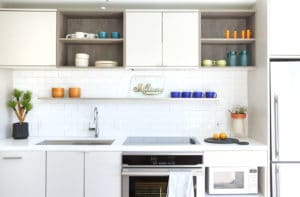 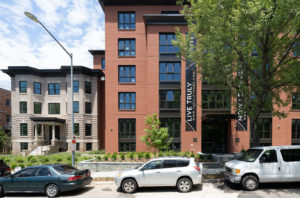 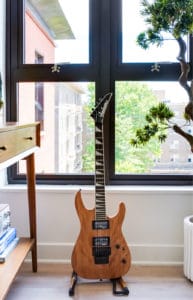 Another cue Benaim took from the Millennials? The artsy vibe of the staging in the model apartments. Every one of them includes a guitar, he says. (Not because actual musicians could likely afford the rent—studios start at $2,000 a month. The largest units are around $5,600. But hey, Big Law associates like to feel bohemian, too.) 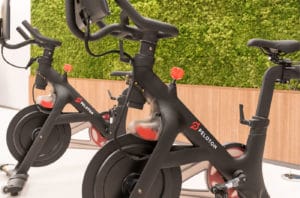 The gym, however, is where Benaim really gets to brag. He says he knows the guys behind Homage Fitness, who are Scarlett Johansson’s personal trainers. He solicited their input for the design and types of equipment to include. It has a boxing station and Peloton bikes and a wall of preserved moss. 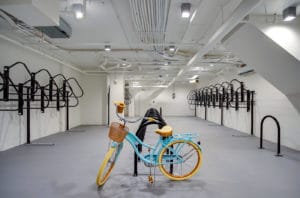 But back to the Harvard Millennials. Turns out they like bikes. Which is good news for DC’s young professionals, who also like bikes. So Benaim built a massive storage room for all of the bikes. It also has a repair station. 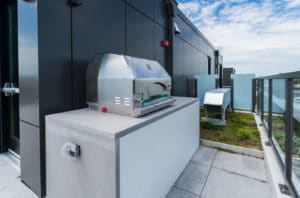 The rooftop amenities are not as elaborate as some buildings. There’s no infinity pool, or even any pool. But there is a sleek, communal kitchen and dining area inside that’s big enough for parties. And outside, Benaim had a pizza oven installed. On the whole, it’s a lovely building in a nice location. But is it so different from all the other new, luxury apartments in town that, as far as I know, weren’t focus-grouped at Harvard? Not really. (Although none of those involved ScarJo.) 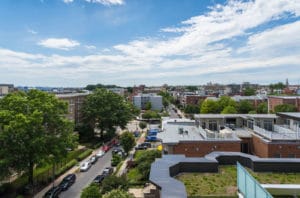 Drop Us a Line

Thank You
For Your Inquiry

We’ll be in touch soon!

This website uses cookies to improve your experience while you navigate through the website. Out of these, the cookies that are categorized as necessary are stored on your browser as they are essential for the working of basic functionalities of the website. We also use third-party cookies that help us analyze and understand how you use this website. These cookies will be stored in your browser only with your consent. You also have the option to opt-out of these cookies. But opting out of some of these cookies may affect your browsing experience.
Necessary Always Enabled

Any cookies that may not be particularly necessary for the website to function and is used specifically to collect user personal data via analytics, ads, other embedded contents are termed as non-necessary cookies. It is mandatory to procure user consent prior to running these cookies on your website.